Treasonous Kerry Jang needs to be removed from city council. Replacement of Canada’s founding peoples is bad enough — now, this man seems like he wants to hand over Vancouver to his Chinese masters. We won’t stand for it! Please sign this petition, and encourage your friends and associates to do so as well. 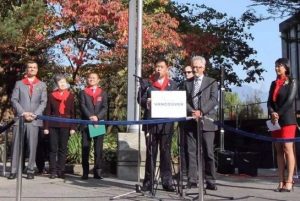 Please click this link to go to the online petiton page 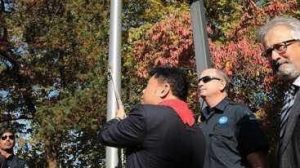 The red scarf he wore during that ceremony has a strong political implication, meaning the struggle for communism. This flag raising farce telling us that Councillor Kerry Jang lacks basic common sense as a politician in dealing with relationship with a foreign government. His act as a city councillor during this ceremony shames the whole city of Vancouver. We request councillor Kerry Jang to apologize for his misconduct and explain how this ceremony was organized; we ask for the resignation of Kerry Jang as a Vancouver City Councillor; we also request Vancouver City Mayor Gregor Robertson to explain how this ceremony happened and if he supported this event.