MOHAMMED WAS NOT ANOTHER JESUS

Posted on February 14, 2021
MOHAMMED WAS NOT ANOTHER JESUS
The purpose of Patrick Grady’s novel “Royal Canadian Jihad” is to teach Canadians about Islam. It is also to warn them about the potential dangers of some Muslims (the Muslim Brotherhood especially) who have settled in Canada and infiltrated many of Canada’s institutions–including our National Parliament and our provincial legislatures.
It is definitely not another version of the harmless Muslims portrayed in CBC Television’s “Little Mosque On The Prairie”.
From the time when the novel form originated in the early 1700’s, realism has been one of its major characteristics. Mr. Grady’s novel, which at times resembles a documentary, follows that tradition. His narrative begins with a factual reference to the destruction of New York’s World Trade Center. It includes many other real-life incidents and characters. 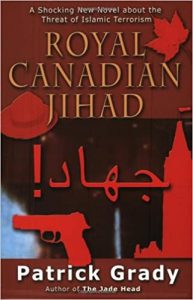