The Government of Canada is maintaining its commitment to a strong immigration program and will welcome 300,000 immigrants in 2017.

Immigration plays an important role in keeping Canada competitive in a global economy. It helps offset the impacts of an aging population and the fact that the number of people in Canada’s labour force will soon be in decline. In fact, immigration will soon account for all net labour force growth as the number of retirements outpaces the number of Canadian youth joining the labour market. For these reasons, the Government has established 300,000 as a new baseline for permanent resident admissions with the majority of these selected as economic immigrants.

Within this plan, the number of permanent residents selected in economic programs will increase. Though planned admissions of resettled refugees will decrease when compared to the extraordinary target in 2016, they will continue to remain among the highest in Canada’s history and will be more than double the target in 2015. Maintaining the Government’s commitment to family reunification, the 2017 plan also sees an increase to family class levels, which will help to reduce processing times and reunite more families.

Overall, the plan balances high immigration levels with improvements to the immigration system, including reducing backlogs.

The approach to the 2017 levels plan was guided by feedback from Canadians gathered over the summer months and from provinces and territories. 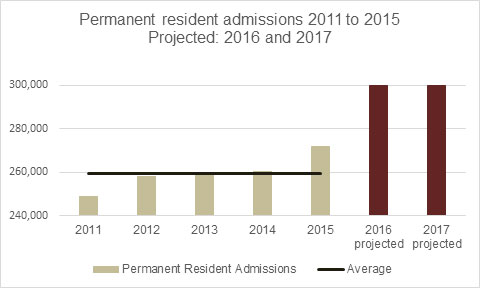 In 2017, economic immigration programs will see an overall increase of 7% over 2016. Immigrants with skills and experience are able to quickly contribute to the Canadian economy and society, improving life for the middle class as they help create jobs, spur innovation and strengthen communities.

In 2017, levels for the family class will be increased by 5% over 2016 levels, helping to reunite more families. In recent years, for example, space in the levels plan has not kept up with the number of Canadians getting married to people from other countries and applying to have their spouse immigrate. As a result, wait times for bringing these families together have grown. High levels for the family class in 2017 will continue to address this because higher levels means more applications can be approved and this will result in more families reuniting.

Providing a place of refuge for those fleeing persecution

Canadians compassionately welcome refugees and people in need from around the world, including some of the world’s most vulnerable people trapped in often unsafe or violent situations in their home country that are outside of their control.

As the number of displaced persons reaches unprecedented levels, the Government of Canada remains committed to upholding its humanitarian tradition to resettle refugees and offer protection to those in need.

In 2017, we will welcome one the highest numbers of refugees and protected persons in Canadian history. Though 2016 was an unprecedented year, planned admissions for resettled refugees in 2017 are double those in 2015 and preceding years. There will be substantially more privately sponsored refugees in particular, in comparison to recent years. This recognizes significant growth in the number of Canadians who have applied to sponsor refugees.

Supporting others in need, such as persons selected on humanitarian and compassionate grounds, for reasons of public policy and in the Permit Holder Class, a target of 3,500 admissions are planned.