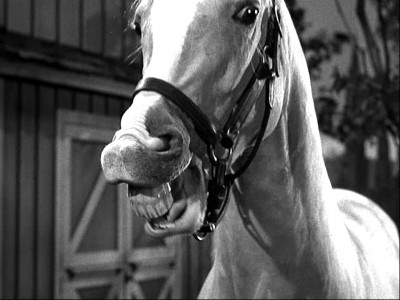 The Famous Mr. Ed Throws His Hat Into the Ring

He talks a good game, but can he deliver?

This upcoming federal election promises to be a horse race.  A recent gallop poll suggested that should Mr. Ed contest this election, if he does not unseat the incumbent—the Shiny Pony–the two will certainly run neck and neck. After four years of governance, the Prime Minister’s coat has lost much of its sheen, so many Canadians are looking more closely at a turncoat from Gatineau to help them ride out the coming economic storm.  While they understand that the re-election of the incumbent would be a night mare, voting for his opponent would be scheer madness.

Mr. Ed’s decision to run was not a spur-of-the-moment one.  It may seem that the Liberals’ tax and spend agenda will attract the plurality of voters who are looking for government to solve their all problems.  But not furlong.  Already hit with massive tax increases, most infamously the counter-productive and onerous carbon taxes that afflict taxpayers across the land, voters are looking for an outspoken, politically incorrect leader like Mr. Ed to reign in government spending. Already saddled with a monstrous federal debt, it is difficult to imagine how any government can service the debt without cutting back on entitlements .  That has always been Mr. Ed’s  mane concern. All parties promise improved services, but once in office, they fail to pony-up with the revenue to pay for it.

No doubt his candidacy will stirrup divisive emotions, with both major parties claiming a maverick like him can only serve as a spoiler, a nuisance candidate without hope of victory. These neigh-sayers argue that historically, the Official Opposition—in this case the Conservatives—eventually wins office, and that the Conservative poll numbers have been rising consistently for the past several months.

But Mr. Ed hopes to buck the trend. A born politician , he’s able to speak out of both sides of his mouth, and convert the oats and hay he consumes at one end into political promises at the other.  Critics counter that he lacks administrative experience and that he is, after all, just a horse—- and a horse is a horse (of course, of course).  Nevertheless, he is the famous Mr. Ed.  And name recognition  and charisma alone might propel him into office.  A Rhodes scholar, his erudition is only exceeded by his impressive physicality, which has led many Phillies in the Press Gallery to refer to him as a real stud.  No wonder they greet him with unbridled enthusiasm. Meanwhile, he continues to barnstorm the country from coast to coast, hoping that his run for office will become a stampede.

While he was quick out of the starting gate, Mr. Ed still lags behind, jockeying for position while earnestly soliciting donations to stay in the game.  But down the stretch there is every possibility that he could pick up the pace and reach the finish line first. It is all contingent on the CBC allowing him to participate in the national TV debate.  If they do, then it is off to the races for Ed.  A victory in the debate would make him the odds on favourite to form a government.

Should that occur, it would prove to be an historic milestone for Canada.  It would be the first time the front end of a horse ever made it into the Prime Minister’s Office.