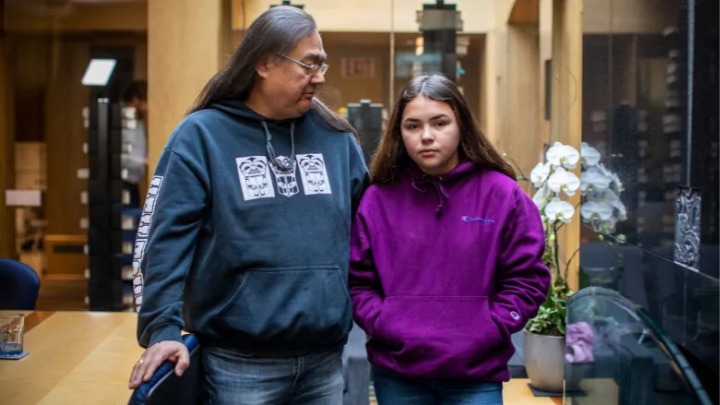 The fact that the BMO Manager at that BMO Head Office was unaware of some crucial basics in Canada’s history indicates that, at the very least, the BMO has to provide very basic Canadian History training for its managers and other potential high level BMO employees.

The behavior of the BMO Manager leads to these inevitable questions :

(1) How did the BMO Manager happen to get the job of “Manager” ? Supposedly, the manager had basic Bank Manager education in Accounting and banking, but were the other important “qualifications” the fact that The BMO Manager was (A) a visible minority of East Indian origin and (B) that BMO was probably blindly following Canada’s “Preferential Hiring for Visible Minorities policy”?

According to a CBC article that was published in late 2019/early 2020, the First Nations grandfather (Maxwell Johnson) presented his “Indian Status Card” to the BMO manager as proof of his identity. The grandfather already had a BMO account and was trying to open another bank account for his grand-daughter (Torianne) who was with him at the time of the incident. However, the BMO Manager apparently did not know what an “Indian Status Card” was. In fact, as wild as this sounds, the BMO manager thought that the grandfather was from India and described the grandfather and grand-daughter as “South Asians” !!

Seeing the phrase “Indian Status”, the manager made a phone call to a government office in a city in India to ask for advice because the manager had concluded that the grandfather was trying to commit fraud. To say the least, this action is bizarre.

(2) How could the BMO Manager have lived in Canada for even a short time and not have absorbed some basics of Canadian history?

(3) How often have those who have benefited from Canada’s unjustified Preferential Hiring policy (supposedly the BMO Manager in this incident) committed bizarre actions like this? The number is probably very high because the number of recent Visible Minorities who have been placed in positions of authority is also very high. Also how many Visible Minority “managers” have engaged in perpetuating the practice of giving preference to Visible Minorities when hiring? For example, It is common in many businesses and government offices to see that employees come from one ethnic group such as Chinese, Sikhs, Muslims. Is there someone in the Ottawa Swamp who is willing to start a thorough investigation into this matter?

(4) Finally and typically, the CBC and other Mainstream Media have seized on this incident to call it another example of “Systemic Racism”. According to the quisling CBC, “Systemic Racism” is rampant in Canada and Whites are the ones perpetrating it. Also according to the CBC, one of the regular victim groups of “systemic racism” is Canada’s First Nations population. The problem with such thinking in this case is that the person who might be accused of racism is the BMO Bank Manager who is not a White person. In fact, if the manager’s name is “Sukhjinder”, the manager is probably a brown-skinned or black-skinned Sikh !!

In spite of some inconsistencies in the story of the incident, the grandfather recently launched a Human Rights complaint against the Bank of Montreal. It would seem that corporations like the Bank of Montreal, other big banks/ large corporations and Canada’s politicians need to be significantly embarrassed in order for bizarre incidents like this to stop. These people don’t seem to learn in any other way. After the bizarre incident was publicized, about 15 BMO representatives flew into the Bella Bella Reserve where the First Nations Grandfather and his granddaughter lived. On the reserve, all 15 participated in a “cleansing” ceremony. How about a type of cleansing ceremony that would help even more? How about Canada’s politicians cleansing Canada of its policy of Preferential Hiring for Visible Minorities? After all, according to Dr. Martin Loney’s extensive research on preferential hiring, there never was any evidence for implementing that policy. If the Liberals really believe in evidence-based legislation, how has such a sloppily-based policy introduced by a sloppy judge (Rosalie Abella) continued to exist?

The CBC Reporter who first wrote about this incident is Angela Sterritt. Ironically, she comes from a First Nations group called the Gitksan whose traditional territory is in Central and north-western B.C.